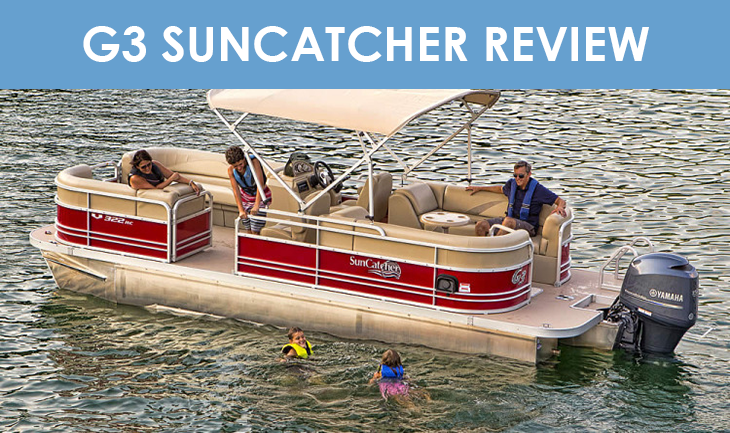 Our Review of the G3 SunCatcher Pontoon

We understand that you’re on this website for two possible reasons: you’re already the owner of a pontoon boat, and you’re looking for a couple of nice and fun ideas on what to do with it, or you’re planning to buy a boat. In this latter case, we’d like to present you with our top recommendation: the G3 Suncatcher line of pontoon boats.

G3 is not one of the oldest boat companies in the world, but it does have plenty of experience in the business nonetheless. Acquired by Yamaha in 1997, the company became Yamaha’s aluminum boat division, while the sister company Skeeter (purchased about two years earlier) moved towards fiberglass hull production. With the production center in Lebanon, Missouri, a.k.a. “the aluminum capital of the world,” G3 is now producing a fairly wide range of boats, different by construction, accessories, and price. In fact, while their budget products go well below the $5,000 mark, their Elite series of pontoon boats easily exceed $75,000.

G3 is not a pontoon-only company. Quite on the contrary, the production is diverse, with fishing boats, deep-v boats, Jon boats, and bay boats also exiting their factory at a rapid pace. SunCatcher is the name of their pontoon boat line, covering three main series of pontoons: Elite, X, and V-series.

Here’s what the facts are and what we think of the SunCatcher models, considering reviews from a couple of owners.

As stated above, SunCatchers are quite the wide range of boats, with a correspondingly wide range of prices. While the budget pontoons can get pretty budget indeed (the small V16C model goes for less than $20,000), the more expensive models may very well be as expensive as or even more expensive than other luxury boats.

SunCatcher pontoons are classified into three categories, according to their build, accessories, and price. These are the Elite series, the X series, and the V series. Let’s take a look at each one:

Elite Series: basically, the epitome of pontoon boat luxury. These pontoons are on par with any other high-class pontoon by any other high-class manufacturer, such as Avalon, Harris, or Regency. Currently, there are 10 models available in the Elite series, all of which are trimarans. The engine options will probably pop your eyes out of their sockets: the smallest engine available for an Elite model is an amazing 225hp, while the strongest one reaches 300hp. It’s true that the dry hull weight only is 3000-3300 pounds, more than 1000 pounds above the X and V series, but with such powerful engines, it doesn’t really matter.

Besides the strong engine, these boats also feature whatever you may want from a luxury boat. For instance, they feature hardwood flooring, high-class sound systems, custom consoles with GPS and so on, full-length underdeck shield, lifting strakes, ski tow, suede-like fabric on the seats, accent lights, in-deck storage, cooler bars and many, many more options.

X series: middle-range pontoons for those who can’t exactly afford an Elite model, but still have a pretty good budget. While not being quite as luxurious as the Elite models, they also feature powerful engines, at 115, 150, or 225hp, and they can have either the catamaran or the trimaran build with full-length under skinning. The series comprises 12 models.

As far as the accessories go, the X series is a good middle ground between the Elite and the budget V series. They feature either hardwood or soft-touch vinyl floor covers, a high-quality sound system, custom console with GPS mapping and fish finder, plush loungers, and high-back recliners. Some models also have in-deck storage and a couple of other accessories, but they nonetheless have fewer standard features than the Elite series. You can add them anyway, but it will cost you extra money.

V series: these are the more budget choices. Rather than being luxury cruisers for your party of 15 rich friends, they are more like family vehicles, designed for beginner pontooner owners to take their kids out fishing or tubing. Under the “You Need to Be Here” tagline, this series aims to attract new customers to the G3 products. They can’t have particularly powerful engines fitted; the smallest engine runs at 60hp, while the biggest does not exceed 115hp. However, the 115hp engine is more than enough for a 22’ boat with a full load to tow a tube at a satisfying speed, so this is not a problem. The V-series boats also feature trimaran build, though most of them are catamarans. There are 21 models in the V series, starting from the tiny V16C, at 16’, with a maximum capacity of 6 persons, to the 22’ V322SS, which can accommodate twice the number of people.

These pontoons don’t come as amazingly customized as their more luxury counterparts. They have soft-touch vinyl, plush loungers, swivel chairs, fairly OK sound systems, and some of them also have in-deck storage space. They don’t look so premium, that’s for sure, but they’re not really cheap either. A problem is that many of them either have partial under skinning or none at all, which may prove to be an issue in the long run, particularly for those who live in more humid places.

Well, as it’s pontoon boats we’re talking about here, it’d be pretty difficult to say they “perform” one way or another, since they’re just glorified log rafts. They don’t look particularly hydrodynamic and you can, indeed, expect them to plow right down into the base of a wave if you’re daring (we’d use a harsher word here, really) enough to stay out in a storm.

However, this is a problem with literally every pontoon boat ever and has nothing to do with SunCatchers in particular. These G3 pontoons work just as well as any other brand, including some of the more expensive names, and can do whatever any pontoon can do, no problem. Of course, the particularities of a certain series or model make all the difference in speed, stability, and so on. The bottom line is that, beyond all accessories and high price, any SunCatcher boat will work just fine for a wide variety of tasks, including fishing, cruising, waterskiing, partying, having a barbecue and pretty much anything else you can do on a pontoon.

Sure, they can’t go as fast as a traditional V-hull. That’s a given. Then again, it’s not their job to go as fast either. The whole point of a pontoon boat is to offer a big, wide, stable platform which no v-hull can give you. Just try to sit on the edge of a traditional fishing boat and see how well that works for you. On the other hand, leaning against the railing of a pontoon boat will do nothing to compromise its balance. What’s more, SunCatcher models usually have a central fuel tank (many other companies place it on the same side as the captain’s seat, mostly the starboard), which also contributes to this stability.

Besides the construction details, the most significant thing when we’re talking about reliability of a boat is the engine. In this case, Yamaha does probably the best job in the world of boats, pretty much like they do it with motorbikes and such. In fact, they have improved their technology to such an extent that the 115hp engine only weighs a tad bit more than the 90hp version, at 377lb, and delivers quite a bit more oomph. The F300 engine weighs almost 200lbs more, at 562lbs, but it also has 300hp, which shows a much-improved power/weight ratio. On the other hand, the 115hp engine warranty is only three years instead of the usual 5, which is a bit odd for a company that trusts its products. However, we couldn’t find any complaints regarding the engine, so the warranty issue appears to not really be an issue.

What is an issue, however, is that some of the SunCatcher models don’t come with under skinning. In drier environments, this is not really an issue, as the boat will get dry as soon as it’s taken out of the water. However, if you live in a more humid area, particularly in the southern states, you’ll find that the wooden deck tends to catch mold pretty easily when constantly exposed to water and, even worse, it also tends to rot in time. What’s more, water hitting the cross members makes for a bit of a bumpy ride, especially at higher speed.

Another problem appears to be with the hinges on the gates. They are, of course, made of heavy-duty material, but they are nonetheless two small hinges. While this would be no problem if the gates only open and close, the weight of someone leaning onto them could very well send the ‘toon to the repair shop. As such, we believe that a full-length hinge or at least two or three more solid hinges would be a lot better.

A good point which all pontoon boats should have, in our humble opinion, is that the pontoons themselves are filled with foam. G3 makes it a matter of honor that no pontoon boat sinks, even if the logs are pierced, cut, or otherwise damaged. As such, you can be sure that, even in the unlikely event of your boat being damaged mid-trip, you won’t have to swim to the shore by yourself. Moreover, styrofoam-filled logs will not bend as easily when hit, which means both safer aesthetical value and consistent performance.

Another great little detail is the splash guard in front of the pontoons. While most of the other companies only use a bent piece of metal, SunCatcher models have a tough, double-reinforced splash guard. While this may not seem like much when you’re buying the boat, you’ll see its value immediately when docking on a windy day. Simple, cheap guards bend and break very easily, while the double-reinforced guard will stay intact and subsequently protect the integrity of your pontoons as well.

All in all, G3 SunCatcher boats are considered among the safest boats on the market. This is certified by the National Marine Manufacturers Association, which is known for having some pretty strict standards when it comes to safety. The Coast Guard, as well as the American Boat and Yacht Club, contribute to establishing these standards, which each and every one of the SunCatcher boats meets or exceeds.

I bought a Suncatcher v322 GT in Florida. I didn’t know it was a salt water edition. I live in Illinois. Should I be concerned. Thank You

Absolutely not a concern for you. If it were the other way round and you were moving to a salt water area with a fresh water edition then it would affect your boat.